The Eight Views of God 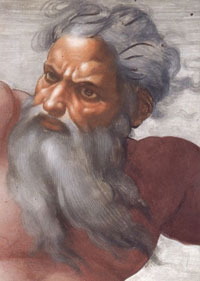 If you step back and look at how man has viewed God through history, you can see it comes down to 8 different views of God.

Hinduism shares a similar, yet "not quite the same" view as the three Abrahamic religions. And the Buddhist believes in nirvana.

More than likely you hold one of these eight views of God, whatever you believe.

Trinitarian Monotheism is the view that there is only one God, but within this one God are three distinct, yet equal persons -- God the Father, God the Son, and God the Holy Spirit. All Christian religions are proponents of Trinitarian Monotheism, with some variations on specifics.

Polytheism is the view that there are many gods. Polytheism is an ancient view found in some of the earliest religions and tribes. Abraham lived in a culture in which polytheism thrived. The ancient Egyptian religion held to multiple gods as did many of the tribes of Africa. Ancient Greek mythology is known for its pantheon of gods. Although the many thousands of Hindu gods are often viewed as manifestations of the one Brahman, Hinduism is rightly considered a polytheistic religion.

Henotheism is the view that there is one god who is supreme, but there are also other deities as well. This perspective has been found in several Native American religions.

Pantheism is the view that God is nature and nature is God. With this perspective, there is no personal God who exists apart from the universe. Instead, with pantheism, God is inseparably united with nature. Thus, any statement about nature is a statement about God, and vice versa. Some of the ancient pagan religions, and groups such as Wicca, have tended toward pantheism. The seventeenth-century philosopher Baruch Spinoza promoted a form of pantheism in which all reality was viewed as being that of a single substance (monism).

Deism is the view that an extremely intelligent and powerful being created the universe, but this being no longer has any contact with the universe. Nor does this being respond to the prayers and concerns of people. With deism, this cosmic creator is akin to a watchmaker who makes a watch, winds it up, and then walks away from it forever. Deism was popular among American and European elites during the time of the American Revolutionary War in the eighteenth century. Thomas Jefferson was a deist.

Atheism is the view that there is no God. Thus, atheists do not believe in God, or any supernatural metaphysical beings. Atheism has always had it adherents; although, major defenses of atheism can be found in the writings of the philosophers Arthur Schopenhauer, Friedrich Nietzsche, and Bertrand Russell.

Agnosticism is the view that knowledge of God is impossible. Immanuel Kant set the philosophical basis for agnosticism with his view that knowledge of the noumenal (metaphysical) realm was beyond the limits of reason. Whereas atheists boldly claim no God exists, agnostics claim that we cannot know anything about God if He indeed does exist. Another form of agnosticism is the claim that we simply do not have enough information to know for sure whether a God exists. The two forms of agnosticism can be seen in the statements below:

So, although these views are what have been held over time, what do the people of today really think? Take a look at this page to see how many of these 8 views are held today.

If you would like to keep up with the latest news on the major religions, sign-up for our newsletter.

So, again.  What do the major religions believe and teach?

They are very different!

Judaism says there's a God, and the way to him is to fulfill God's will which is found most clearly in The 10 Commandments.

Hinduism say's there's a God, but we have to go through reincarnations to get to him, from sub-human form to human form to improve the soul.

The other isms have their twist.

Order our book.  We explain it.  This book is succinct, and gets to the core issues -- the key questions.

You do not have to read the all the books in a bookstore to understand the differences among the religions.