Other Religions -- a few samples 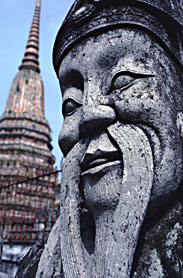 The Five Major Religions are familiar to most everyone. These include Christianity, Islam, Hinduism, Buddhism, and Judaism.

But there are many lesser known religions that millions of the world’s population worship.

In fact, although the 5 major religions account for over 4.3 billion worshipers, the earth’s population is some 6.8 billion so there are about 2 1/2 billion people who fall in the “other religions” category, or practice no religion at all.

Of course, many of these other religions are variations on the 5 major religions. For example in Christianity, Christian Science, Mormonism, Unitarian Universalist, and Jehovah’s Witness all claim the Christian Bible, or parts of it, as a basis for their belief systems. But each has some major differences from “mainstream” Christianity.

In America, some 85% of people identify themselves as Christian. This includes, of course, those who identify themselves as Roman Catholic, and Protestant -- the two major groups.  Within Protestant, the largest group, at some 20%, are the Independent Churches (those who are unaffiliated), the second largest, at about 15%, being Baptist, Methodist being the next largest at about 6%, and Lutheran at some 5%.  All others are very small, less than 3% in any one group. There are many, many subsets of these major faiths, plus other lesser known faiths that are Christian based. There’s even a Jewish religion that believes in Christ called Messianic Judaism.

And it’s also very possible that someone who describes themselves as Christian does not attend any particular church, but merely subscribes to a belief in Christ as the savior.

After Christianity and Islam on the world scene, the belief system with the most followers is the category of non-religious. Folks in this category may even believe in God, but follow no particular organized religion. You could even say that "non-religious" should be considered one of the major religions of the world. If you define "religion" as a "belief system," then this is certainly the case.

And many "self-realized" teachers would say that, as they underwent their spiritual evolution, they passed through this non-religious stage. This stage of extreme doubt, or Dark Night of the Soul, is common enough to be considered an important step on the road to God — or back to God. For some, hitting rock bottom opens the path to God.

Founders of Other Religions

Often these other religions have a founder that offers a new interpretation of other beliefs that puts a different slant on previous tenets.

Mary Baker Eddy founded Christian Science, and although it’s based on Christianity, her belief is that heaven is “not a locality, but a state of Mind in which all the manifestations of Mind are harmonious, and immortal."

Jehovah’s Witnesses, founded by Charles Taze Russell, believe that Heaven is for 144,000 chosen Witnesses, and there is eternity on a new earth for other Witnesses. All others are annihilated. And there is no hell.

Scientology founded by science fiction writer L. Ron Hubbard, believes in reincarnation, and uses a process called “auditing” where practitioners move up a series of levels until they are “cleared,” and gain spiritual freedom.

Buddhism was founded by Siddharta Gautama (the Buddha), and is based on Hinduism and shares many of the same tenets. However, there are fundamental differences including each’s view of a supreme being. Hinduism teaches the Brahman is the one God manifested in many gods and goddesses. Buddhism downplays the God aspect believing that attachment to views of God only gets in the way of enlightenment, nirvana.

Cao Dai founded in Vietnam by Ngo Van Chieu, and others, uses a hierarchy similar to Roman Catholicism. It preaches daily prayer, meditation, and communication with a spirit world. It also teaches reincarnation, and that bad karma can lead to rebirth on a darker planet; good karma to better life on earth. Practice leads to an eventual attainment of nirvana.

Mormonism, founded by Joseph Smith, is based on Christianity, but believes humans existed as spirits before this life, and salvation is returning to God. Salvation is achieved by faith in Christ, good works, ordinances, and evangelism. He believed that God the Father, the Son Jesus Christ, and the Holy Ghost are three separate individual beings.

Seventh Day Adventists was rooted in the Millerite movement, and Ellen White was the main leader. They believe that the Second Coming of Christ is imminent, and salvation is by faith in Christ. There's an emphasis on quality of life both now, and in afterlife. They believe in one God who is a Trinity of Father, Son, and Holy Spirit.

And there are many, many others.

Why Other Religions Are Becoming Popular

The United States’ and the world’s population is changing as it relates to their religious beliefs. Large numbers are moving away from traditional Christianity, and from other organized religions.

According to statistics, currently 14.1% of Americans do not follow any organized religion. This is an unusually rapid increase — almost a doubling — from only 8% in 1990.

People are looking for other choices. Just why is open to interpretation, but according to a USA Today/Gallup Poll in January 2002, almost half of American adults appear to be alienated from organized religion. If current trends continue, perhaps most adults will not be tied to a particular, organized religion.

It could be surmised that people are searching for other answers, and hope that other religions might offer more satisfying answers. This may be a leap, but it certainly seems plausible that after a lifetime with one religion, why not “shop around” for something more effective. There may be nothing to lose, and much to gain.

After all, with so many varying beliefs and variations on standard beliefs that these other religions, why not look for something that is a better “fit” for your current world-view. If your current beliefs are not working, why not move on to something “better”?

Other Reasons To Look At Other Religions

Our “faith” is sometimes a fragile thing. Changing life circumstances are often enough for re-evaluation of what we believe. Marriage, birth of children, death, and approaching old age can cause us to take a deeper look at the fundamental questions about life and death.

There are also many “lightening rod” issues that cause people to take pause, and reconsider their religion.

Some who believe in Pro-Choice on the subject of abortion find their current religion may not share the same viewpoint. They might be inclined towards another religion that shares their view. At least, they won’t feel hypocritical.

Afterlife is another issue that can make you rethink your religious choice — especially as you get older. Perhaps eternal damnation does not sound like a reasonable option if your personal views tend to be more “forgiving” of mistakes in your life. Or, perhaps the eternal finality of many religion’s views on death and hell might cause one to consider a religion that offers a second chance like reincarnation.

Is there really someone who sits in judgment, and decides our fate in this life and the next? Is He/She like us, or something more etheral and mystical? Just what is God like, and how does He affect us?

Turns out many people have different views of God. Some within the same religion. Take a look at this page to see what the four types of God people believe in.

Our changing sense of faith and beliefs can cause us to look to other religions. Perhaps only out of curiosity, but perhaps by larger more profound questions and needs.

We at Major Religions of the World are here to help in your exploration.

After Christianity and Islam, the belief system with the most followers is the category of non-religious. Folks in this category may even believe in God but follow no particular organized religion.