Christianity (from the word Xριστός "Christ") is a monotheistic religion centered on the life and teachings of Jesus as presented in the New Testament.

Its followers, known as Christians, believe that Jesus is the only begotten Son of God and the Messiah (Christ) prophesied in the Hebrew Bible (the part of scripture common to Christianity and Judaism).

To Christians, Jesus Christ is a teacher, the model of a virtuous life, the revealer of God, as well as an incarnation of God. But most importantly Christ is the savior of humanity who suffered, died, and was resurrected to bring about salvation from sin. 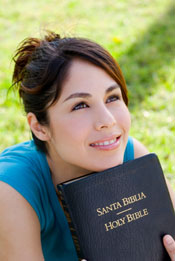 Christians maintain that Jesus ascended into heaven during the Resurrection, and most denominations teach that Jesus will return to judge the living and the dead, granting everlasting life to his followers. Christians call the message of Jesus Christ the Gospel ("good news") and hence label the written accounts of his ministry as gospels.

Like Judaism and Islam, Christianity is classified as an Abrahamic Religion (see also Judeo-Christian). Christianity began as a Jewish sect in the eastern Mediterranean, quickly grew in size and influence over a few decades, and by the 4th century had become the dominant religion within the Roman Empire.

During the Middle Ages, most of the remainder of Europe was christianized, with Christians also being a (sometimes large) religious minority in the Middle East, North Africa, and parts of India. Following the Age of Discovery, through missionary work and colonization, Christianity spread to the Americas and the rest of the world.

Christianity has played a prominent role in the shaping of Western civilization at least since the 4th century. As of the early 21st century, Christianity has between 1.5 billion and 2.1 billion adherents, representing about a quarter to a third of the world's population.

Judaism says there is a God, and the way to him is to fulfil God's will which is found most clearly in The 10 Commandments.

Hinduism says there is a God, but we have to go through reincarnation to get to him, from sub-human form to human form to improve the soul.

The book is succinct, and gets to the core issues -- the key questions.

You do not have to read the entire library to understand the differences among the religions.

What does each religion teach as to:

A Creator? Is there a God?

Each religion's role, what is their purpose?