Early man viewed nature, and came to believe that "God" was somehow part of that environment that he depended on. In fact, early inhabitants of earth saw many gods in the world, and came to depend on each for different aspects of their lives. This polytheism was common, and really the first step in the evolution of spiritual thought. 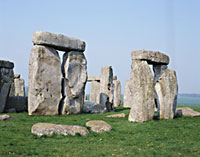 Early man had a god for every phase of their lives... the hunt, war, fertility, and death. They seemed to need guidance in these critical areas of survival that they faced every day.

In many ways this helped early pagans feel closer to their gods. They were easy to relate to because they were an integral part of daily tasks and experiences. Their gods were not saved just for Sundays or holidays.

And although we call ourselves monotheists these days, we often look for spiritual specialists in certain areas of our lives. Some religions have saints who are called upon in certain situations. In Catholicism, St. Christopher is the patron saint of travel and St. Jude is well known for cures, and taking care of children. In Hinduism there is Kali, Shiva, Vishnu, and many others who each watch over certain aspects of life.

It seems polytheism is still in our blood.

And our SPECIAL REPORT, The Case For The Existence Of God, gives an under-standing that, from the beginning, .......

"All human beings -- regardless of either where they live or what religion they may have been raised under -- have a natural longing for God."