Scientology is a religion and belief system created by L. Ron Hubbard, starting in 1952, as a follow-up to his earlier self-help system, Dianetics.

Hubbard called Scientology a religion, and in 1953 incorporated the Church of Scientology in New Jersey.

Scientology believes that people are immortal, spiritual beings who have forgotten their true nature.

Its method of spiritual growth is a type of counseling known as auditing. Through auditing practitioners re-experience painful or traumatic events in their lives (even previous lives), in order to free themselves of their effect on the present.

The word Scientology comes from the Latin word scientia ("knowledge," "skill"), and the Greek logos ("word" or "account [of]").

The theories and beliefs come from L. Ron Hubbard who was a scientist, explorer, and writer. His book Dianetics was a best seller in the 1950's.

Dianetics uses a counseling technique known as auditing, developed by Hubbard to enable conscious recall of traumatic events in an individual's past. He originally intended it to be a new form of psychotherapy. He never expected it to become the foundation for a new religion.

Dianetics: The Modern Science of Mental Health was published in 1950. His book entered the New York Times bestseller list in June and stayed there for the remainder of the year.

Dianetics appealed to a many types of people who used instructions from the book and applied the method to themselves and each other. Hubbard found himself the leader of a growing Dianetics movement. 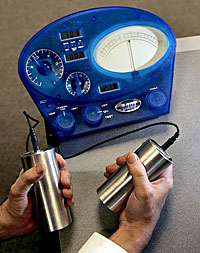 Some practitioners of early Dianetics reported experiences which they believed had occurred in past lives, or previous incarnations. In early 1951, reincarnation became a subject of intense debate within Dianetics. Some followers were hopeful of winning support for Dianetics from the medical community and didn't want to include reincarnation as part of the belief system. But Hubbard decided to take the reports of past life events seriously and postulated the existence of the thetan, a concept similar to the soul. This was an important factor in the transition from secular Dianetics to the religion of Scientology.

Also in 1951, Hubbard introduced the electropsychometer (E-meter for short see above) as an auditing aid. Based on a design by Hubbard, the device is believed by Scientologists to be a helpful tool in detecting changes in state of mind.

The Church of Scientology

In 1952, Hubbard built on the existing framework set forth in Dianetics, and published a new set of teachings as Scientology, a religious philosophy.

Scientology claims that its beliefs and practices are based on scientific research and testing.

"Scientology works 100 percent of the time when it is properly applied to a person who sincerely desires to improve his life", is the official view of the Church of Scientology.

Practitioners are encouraged to validate the value of the methods they apply through their personal experience.

Hubbard himself put it this way: "For a Scientologist, the final test of any knowledge he has gained is, 'did the data and the use of it in life actually improve conditions or didn't it?'"

In Scientology, the belief is that there is such a thing as the thetan. It is believed to be the individualized expression of the cosmic source, or life force, named after the Greek letter theta. The thetan is thought to be the true identity of a person – an intrinsically good, omniscient, non-material core capable of unlimited creativity.

For Scientologists, the universe is thought to have no independent reality, but to derive its apparent reality from the fact that most thetans agree it exists.

Scientologists believe that thetans fell from grace when they began to identify with their creation, rather than their original state of spiritual purity. Eventually, they lost their memory of their true nature, along with the associated spiritual and creative powers. As a result, thetans came to think of themselves as nothing but embodied beings. This has similarities with the Christian view of Adam and Eve's fall from grace in the Garden of Eden.

Thetans are believed to be reborn time and time again in new bodies through a process called "assumption" which is analogous to reincarnation. Like Hinduism, Scientology believe in a causal relationship between the experiences of earlier incarnations, and one's present life. With each rebirth, the effects of the MEST universe (MEST here stands for matter, energy, space, and time) on the thetan are believed to become stronger.

Emotions and the Mind

Scientology says there are two major divisions of the mind. The reactive mind is thought to absorb all pain and emotional trauma, while the analytical mind is a rational mechanism which is responsible for consciousness.

This seems similar to Freud's views of the conscious (ego) and subconscious (id) mind but Scientologists get far more specific in it's affect on our lives.

They say the reactive mind stores mental images which are not readily available to the analytical (conscious) mind. These images are referred to as engrams. Engrams are believed to be painful and debilitating and are the cause of most of our life problems and frustrations.

The essence of Dianetic training involves the practices through which a Scientologist progresses towards a Clear state, eventually being freed from the reactive mind's engrams, and acquiring certainty of his or her reality as a thetan.

Survival and Ethics and Dynamics

Scientology emphasizes the importance of survival, which it subdivides into eight classifications that are referred to as dynamics. An individual's desire to survive is considered to be the first dynamic, while the second dynamic relates to procreation and the family.

The remaining dynamics encompass wider fields of action, involving groups, mankind, all life, the physical universe, the spirit, and the Supreme Being. The optimum solution to any problem is held to be the one that brings the greatest benefit to the greatest number of dynamics.

In Scientology, rationality is stressed over morality. Actions are considered ethical if they promote survival across all eight dynamics, thus benefiting the greatest number of people possible while harming the fewest.

Scientology believes that people have hidden capabilities which they have not yet fully developed. Developing these capabilities are accomplished through counseling sessions referred to as auditing.

Through auditing, people can solve their life problems and free themselves of engrams. This restores them to a natural state as thetans and lets them be at peace in their daily lives. They are no longer under the influence of stored engrams.

The goal is to move from a status of Preclear to Clear, and then to an Operating Thetan. Scientology's ultimate goal is to "clear the planet," and create a world where everyone is freed from their engrams.

Actual Auditing involves a one-on-one session with a Scientology counselor or auditor. It's similar to a Catholic confession or religious counseling. However the auditor does not provide forgiveness or advice the way a pastor or priest might do. The auditor's task is to help the person discover and understand engrams, and their limiting effects, for themselves.

Most auditing requires an E-meter, a device that measures minute changes in electrical resistance through the body when a person holds electrodes (metal "cans"), and a small current is passed through them. Scientology asserts that watching for changes in the E-meter's display helps locate engrams.

Once a problem area has been identified, the auditor asks specific questions about it, in order to help them eliminate the engram. The E-meter confirms that the engram's "charge" has been dissipated and the engram has in fact been cleared.

As the individual progresses, the focus of auditing moves from simple engrams to engrams of increasing complexity. At the more advanced OT auditing levels, Scientologists perform solo auditing sessions, acting as their own auditors.

Scientology believes that people are immortal, spiritual beings who have forgotten their true nature. Its method of spiritual growth is a type of counseling known as auditing where repressed memories and actions are brought back and released.