The Five Pillars of Faith

In Islam, to be a Muslim, one must believe in, and follow, the Five Pillars of Faith.

Following these Five Pillars of Faith is critical to being a good Muslim.

The Five Pillars of Faith Video

The Five Pillars of Faith are supplemented by the Articles of Faith. The Islam faith has six main articles of faith, which outline their beliefs in God, prophets, books of revelation, angels, the hereafter, and destiny.

So, Islam's doctrine is often summarized in these Six Articles of Faith.

According to this list, to be a Muslim, one must believe in: 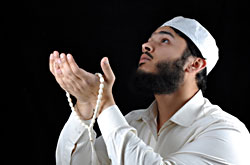 Islam's fundamental theological concept is tawlid - the doctrine of one God. The Arabic term for God is ALLAH (always shown in capital letters to show respect); most scholars believe it was derived from a contraction of the words al- (the) and il_h (deity, masculine form), meaning "the god" (al-il_h).

The first of the Five Pillars of Islam, tawhid is expressed in the Shahadah, which declares that there is no god but God, and that Muhammad is God's messenger.

In traditional Islamic theology, ALLAH is beyond all comprehension; Muslims are not expected to visualize ALLAH, but to worship, and adore him as a protector.  However, ALLAH is to feared and strictly obeyed, but his attributes cannot be personally experienced in a person's heart -- there is no personal relationship with ALLAH.  Adhering to Islam's all encompassing way of life and good works are very important part of receiving salvation, and gaining entrance into Paradise (Heaven).

It is worth noting that while Jesus is a prophet in Islamic theology, he was just a man, and not the son of God.

2. The Angels of ALLAH

Belief in angels is crucial to the faith of Islam. The Arabic word for angel is malak, which means "messenger," like its counterparts in Hebrew (malakh) and Greek (angelos).

According to the Qur'an, angels do not possess free will, and worship ALLAH in perfect obedience. The duties for angels include communicating revelations from ALLAH, glorifying ALLAH recording every person's actions, and taking a person's soul at the time of death.

They are also thought to intercede on humankind's behalf. The Qur'an describes angels as "messengers with wings - two, or three, or four (pairs): He [God] adds to Creation as He pleases.

3. The Books of God, Especially the Qur'an

It is taught that the Qur'an (Koran is English) continues the Old Testament and New Testament of the Judeo-Christian Bible, God's earlier revelations, and is their culmination.

In the Qur'an (sura 5:70, 68), there is this passage:  "We have made a covenant of old with the Children of Israel, and you have nothing of guidance until you observe the Torah and the Gospel."  Oddly, Jews and Christians are to be included with Muslims as "People of the Book."

The Islam religion teaches that the Qur'an to be the literal word of ALLAH; it is the central religious text of Islam. It teaches that the verses of the Qur'an were revealed to Muhammad by ALLAH through the angel Gabriel on many occasions between 610 and his death on June 8, 632.

The Qur'an was reportedly written down by Muhammad's companions (Muhammad could not read or write) while he was alive; although, the prime method of transmission was oral. It was compiled in the time of Abu Bakr, the first caliph, and was standardized under the administration of Uthman, the third caliph.

From textual evidence, Islamic studies scholars find that the Qur'an of today has not changed significantly over the centuries.

4.  The Prophets of ALLAH, Especially Muhammad

Muhammad (c.570 - June 8, 632) was an Arab religious, political, and military leader who founded the religion of Islam. Muslims view him not as the creator of a new religion, but as the restorer of the original, uncorrupted monotheistic faith of Adam and Abraham, and continued with the other prophets -- Abraham, Moses, and all the prophets of the Jewish Bible.  Jesus is included with these prophets.

In Muslim tradition, Muhammad is viewed as the last, and the greatest, in a series of prophets - as the man closest to perfection, the possessor of all virtues. For the last 23 years of his life, beginning at age 40, Muhammad reported receiving revelations from ALLAH. The content of these revelations, known as the Qur'an, was memorized, and recorded by his companions.

Based on the Qur'an, it needs to be noted, Muhammad taught there is no separation between Church and State -- both are one.  Islam is not considered to be something separate from the rest of life; rather, it is a way of life.  Islam is a complete system of life: physical, mental, business, civic, social, family, spiritual, and academic.  It is an all encompassing way of life, even with its own judicial system.

5. The Day of Judgment, as-s_`a, "the Last Hour," and Belief in the "Day of Resurrection", Yawm al-Qiyamah.

Islam teaches that the time of Qiyamah (the Day of Resurrection) is God's final assessment of humanity. This day is preordained by ALLAH, but unknown to man. The trials and tribulations preceding, and during, the Qiyamah are described in the Qur'an and the hadith, and also in the commentaries of Islamic scholars.

The Qur'an emphasizes bodily resurrection, a break from the pre-Islamic Arabian understanding of death. It states that resurrection will be followed by the gathering of humankind, culminating in their judgment by God, ALLAH.

The Qur'an lists several sins that can condemn a person to hell, such as disbelief (Muhammad's teachings, Islamic theology), usury, and dishonesty.  Along this line, there are various practices aimed at controlling the evil and sinfulness of humankind, while giving glory to ALLAH.

Some of these practices include: abstinence from gambling, drinking alcohol, and eating pork (an unclean meat according to Hebrew Scripture Law).  In order to remove as much sexual temptation as possible, have women cover their hair (the crown of their beauty), veil their faces in some Muslim societies, and have men and women completely cover their body with loose clothing so as not to show, or display, physical attributes of the person.

Islam's view of paradise (jannah) is a place of joy and bliss, with Qur'anic references describing its features and the physical pleasures. There are also references to a greater joy - acceptance by ALLAH. Mystical traditions in Islam place these heavenly delights in the context of an ecstatic awareness of ALLAH.

6. The Supremacy of ALLAH's Will (or Predestination).

In accordance with the Sunni Islamic belief in predestination, or divine pre ordainment (al-qada wa'l-qadar), ALLAH has full knowledge and control over all that occurs. This is explained in Qur'anic verses such as...

"Say: 'Nothing will happen to us except what ALLAH has decreed for us: He is our protector:' and on ALLAH let the Believers put their trust." Qur'an 9:51

In the Islam religion, everything in the world that occurs, good or evil, has been preordained, and nothing can happen unless permitted by ALLAH. According to Islam theologians, although events are pre-ordained, humankind possesses free-will in that they have the faculty to choose between right and wrong; thus, responsible for their actions.

According to Islamic tradition, all that has been decreed by ALLAH is written in al-Lawh al-Mahfuz, the "Preserved Tablet." The Shi'a understanding of free-will is called "divine justice" (Adalah). This doctrine, originally developed by the Mu'tazila (an Islamic distinct school of speculative theology that flourished in Basra and Baghdad (8th-10th centuries, and still adopted by a small dispersed minority of Muslims and some Islamic intellectuals) stresses the importance of man's responsibility for his own actions. In contrast, the Sunni de-emphasize the role of individual free-will in the context of ALLAH's creation, and foreknowledge of all things.

This list is sometimes shortened to Five Articles of Faith, which leaves off belief in the supremacy of God's will.

So The Five Pillars of Faith combined with the Articles of Faith form the basis of the Islamic belief system.

The Five Pillars of Faith, supplemented by the Articles of Faith, form the basis for everything that a Muslim believes and must do to be faithful to the Islam religion.