Al-Qaeda (pronounced al-KYE-da. Arabic meaning, "the base") is an Islamist group founded sometime between August 1988 and late 1989/early 1990.

It operates as a network comprising both a multinational, stateless arm, and a fundamentalist Sunni movement calling for al-qaeda al-sulbah (a vanguard of the strong).

Osama bin Laden explained the origin of the term in a videotaped interview with Al Jazeera journalist, Tayseer Alouni, in October 2001. 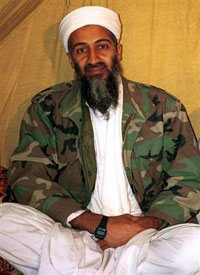 Toward the end of the Soviet military mission in Afghanistan, some mujahedeen wanted to expand their operations to include Islamist struggles in other parts of the world, such as Israel and Kashmir. A number of overlapping and interrelated organizations were formed to further those aspirations.

One of these was the organization of Osama bin Laden. In the beginning, he wished to establish non-military operations in other parts of the world. However, another organization, in contrast, wanted to remain focused on military campaigns. This was known as The Maktab al-Khidamat, MAK, and was known as the Afghan Services Bureau, also.

The MAK organization was founded in 1984 by Abdullah Azzam along with, oddly enough, Osama bin Laden to raise funds, and recruit foreign mujahedeen for the war against the Soviets in Afghanistan. After Azzam was assassinated in 1989, the MAK split, with a significant number joining bin Laden's organization.

Another organization, The Egyptian Islamic Jihad (formerly called simply Islamic Jihad) was organized to be a liberation army for Holy Sites. This is an Egyptian Islamist group active since the late 1970s, with origins in the Muslim Brotherhood (a transnational Sunni movement, and the largest political opposition organization in many Arab states). It was led by Ayman al-Zawahiri, later to become one of the leaders in al-Qaeda.

All these combined organizations would eventually merge, and be called al-Qaeda. Osama bin Laden would become its leader.

As an aside, MAK was instrumental in the creating the recruitment network and the fundraising network (By way of example: according to Michael Scheuer, head of the CIA's first bin Laden unit, about $600 million was passed through bin Laden's MAK charity fronts from 1980 to 1989.), and therefore, this was a great benefit to this combined al-Qaeda organization during the 1990s.

The Beginnings of Osama Bin Laden

Islamic revival refers to a revival of the Islamic religion throughout the Islamic world, that began roughly sometime in 1970s. It is manifested in greater religious piety and community feeling, and in a growing adoption of Islamic culture: dress, terminology, separation of the sexes, and values by Muslims.

The Islamist movement, or Islamism, is a set of ideologies holding that Islam is not only a religion, but also a political system; therefore, modern Muslims must return to their roots of their religion, and unite politically.

Some have argued that "without the writings of Sayyid Qutb (1906 - 1966), an Egyptian author, educator, Islamist, poet, and a leading intellectual of the Muslim Brotherhood, al-Qaeda would not have existed." These writings had tremendous impact on the Arab people, and were used by leaders such as Osama bin Laden. Qutb preached that because of the lack of shari'a law the Muslim world was no longer Muslim, having reverted to pre-Islamic ignorance known as jahiliyyah. (Jahiliyyah, or al-Jahiliyah, is an Islamic concept of "ignorance of divine guidance," referring to the condition Arabs found themselves in pre-Islamic Arabia; i.e., prior to the revelation of the Qur'an to Muhammad. By extension, it means the state of anyone not following Islam and the Qur'an.)

While neither bin Laden nor al-Zawahiri possessed the traditional Islamic scholarly or theological qualifications to issue a fatwa of any kind, they decided to take it upon themselves to issue one anyway. (A fatwa, in the Islamic faith, is a religious opinion concerning Islamic law issued by an Islamic scholar. It can be a binding religious edict.)

So, on February 23, 1998, Osama bin Laden and Ayman al-Zawahiri, a leader of Egyptian Islamic Jihad, along with three other Islamist leaders, co-signed and issued a fatwa under the banner of the World Islamic Front for Combat Against the Jews and Crusaders declaring:

"The ruling to kill the Americans and their allies (civilians and military) is an individual duty for every Muslim who can do it in any country in which it is possible to do it, in order to liberate the al-Aqsa Mosque (in Jerusalem) and the holy mosque (in Mecca) from their grip, and in order for their armies to move out of all the lands of Islam, defeated and unable to threaten any Muslim. This is in accordance with the words of Almighty Allah, 'and fight the pagans all together as they fight you all together,' and 'fight them until there is no more tumult or oppression, and there prevail justice and faith in Allah.' "

Al-Qaeda is arguably one of the world's most formidable and resilient terrorist movements.; however, following the September 11 attacks and the U.S. invasion of Afghanistan, al-Qaeda lost its training camps, operational bases, and command headquarters in that country. Thousands of its fighters and many of its leaders were killed, or captured. Nevertheless, al-Qaeda has demonstrated a remarkable ability to continue its violent attacks.

The current organizational structure of al-Qaeda is unknown because of two factors:

However, based on information from captured leaders, the organization was along these lines:

Thence, these were the main committees:

As to where al-Qaeda established operations, the current situation is hazy; again, the effectiveness of the War on Terror. However, from 1991 to 1996, bin Laden quietly built al-Qaeda into a formidable international terrorist network, with cells and operations in at least 45 countries.

The available information as to effective and organized operations in these areas is very sketchy, and not reliable (many groups are splinter groups aligned with al-Qaeda, but no direct reporting lines); so, it is best summarized by the director of the CIA (Central Intelligence Agency) November 14, 2008 along these lines:

WASHINGTON -- General Michael Hayden, the director of the U.S. Central Intelligence Agency, has said that Al-Qaeda and its leader, Osama bin Laden, remain isolated in the remote mountains of Pakistan near the Afghan border. (Note: this is the North-West Frontier Province.)

Hayden said there are three important points to remember about the U.S. fight against Al-Qaeda. First, while the group has suffered serious setbacks, it remains determined and adaptive. Second, it's resilient and vulnerable. And third, it remains the most serious threat to the United States.

This leaves Al-Qaeda somewhat isolated in Pakistan's rugged tribal area. While this arduous existence contributes to the organization's resilience and its ability to threaten the West, Hayden said, it also represents Al-Qaeda's key vulnerability.

"The truth is, it's not all that easy to build a worldwide terrorist network, and manage a global fight, from an isolated outpost in northwestern Pakistan," he said. "And to the extent that the United States and its allies deepen that isolation, disturb the safe haven, target terrorist leaders there, we keep Al-Qaeda off-balance."

It needs to be noted that al-Qaeda has lost significant support. However, while many major Arab political and religious leaders have condemned al-Qaeda's terrorist's activities and its leaders, many have not (particularly those in Saudi Arabia, Iraq, and Iran). On the other hand, the leaders in non-Arab Islamic world have denounced these actions, and condemned al-Qaeda.

According to a number of sources there has been a "rising tide of anger in the Islamic world toward al-Qaeda and its affiliates" by "religious scholars, former fighters, and militants ... alarmed" by al-Qaeda's takfir (Takfir is the practice of declaring either individuals or a group as unbelievers, those previously considered Muslim), and killing of Muslims in Muslim countries, especially Iraq.

According to Pew polls, support for Al Qaeda has been dropping around the Muslim world in recent years. The numbers supporting suicide bombings in Indonesia, Lebanon, and Bangladesh, for instance, has dropped by half, or more, in the last five years. In Saudi Arabia, only 10 percent now have a favorable view of al-Qaeda, according to a December 2007 poll by Terror Free Tomorrow, a Washington-based think tank.

The United States reacted to the September 11 attacks by declaring a global war against terrorism. Offensive military operations started on October 7, 2001. In addition, the United States and its allies mounted a worldwide campaign to block al-Qaeda's funding, and hamper its ability to obtain and transfer money. Front organizations and charities from which contributions were diverted to fund terrorism were closed down.

A global counterterrorist law enforcement effort was also put into effect, resulting in the arrests of nearly 1,000 al-Qaeda operatives in more than 60 countries. By the end of 2002, more than 3,000 members of the international terrorist network were reported to have been apprehended, and a third of its top leadership had been either killed or captured. By the end of 2004, the U.S. government claimed that two-thirds of the top leaders of al-Qaeda from 2001 were apprehended

Despite the capture or death of many senior al-Qaeda operatives, the U.S. government continues to warn that the organization is not yet defeated, and battles between U.S. forces and al-Qaeda-related groups continue.

With this background, these are some of the major attacks that have been ordered by al-Qaeda:

The Muhammad cartoons controversy began after twelve editorial cartoons were published in a Danish newspaper Jyllands-Posten, on September 30, 2005. Most of these cartoons depicted the Islamic prophet Muhammad in a comical manner, being critical of Islam. In addition, examples of the cartoons were soon reprinted in newspapers in more than fifty other countries, further deepening the controversy.

In 2009, worldwide counterterrorism units have interrupted the most serious attempts. That effort continues.

In 1996, al-Qaeda announced its jihad to expel foreign troops, and interests, from what they felt were Islamic lands.

This amounted to a public declaration of war against the United States and any of its allies, and began to focus al-Qaeda's resources towards attacking the United States, and its interests.