This Nicene Creed was the product of the First Council of Nicaea (named for a city inland across the Bosporus Sea from Constantinople, or modern day Istanbul, Turkey) in the year 325 AD.  (Later, it was ratified as the universal creed of Christendom by the Council of Ephesus in 431.)

During this time, the Christian faith was the dominant religion, and there was tremendous controversy, bad teachings, and false teachers all over the Empire. In many cities and areas, it was causing serious divisions in these communities within the Empire.   It was a mess!

It was so bad, so serious throughout the Empire, that this council of religious scholars and clergy from all over the Empire was called by the Emperor Constantine in an attempt to define the true orthodox beliefs and the fundamental principals of the Christian faith.   This gathering’s main interest was to secure unity (calm-down everyone) rather than any predetermined theological verdict.

All this council was trying to do was put a fence around what the people were to be taught, what they were to believe, in that day and time.   Little did they know that this creed, this summary of the Bible and its teachings, would last to this day, some 1,700 years later.

So, whenever the creed is recited it is a reminder of what Christians specifically believe, and a reaffirmation of their faith.

We believe in one God,
the Father, the Almighty,
maker of heaven and earth,
of all that is, …seen and unseen.

We believe in one Lord, Jesus Christ,
the only Son of God,
eternally begotten of the Father,
God from God, Light from Light,
true God from true God,
of one Being with the Father.

Through Him all things were made.

For us and for our salvation
He came down from heaven;
by the power of the Holy Spirit,
he became incarnate from the Virgin Mary,
and was made man.

For our sake He was crucified under Pontius Pilate;
He suffered death and was buried.

On the third day He rose again in accordance with the Scriptures;
he ascended into heaven,
and is seated at the right hand of the Father.

He will come again in glory to judge the living and the dead,
and his kingdom will have no end.

We believe in the Holy Spirit, the Lord, the giver of life,

who proceeds from the Father and the Son.*

With the Father and the Son* he is worshiped and glorified.

We believe in one holy catholic and apostolic Church.

We acknowledge one baptism for the forgiveness of sins.

We look for the resurrection of the dead,
and the life of the world to come.

Arianism is the doctrine of Arius, who taught in Alexandria, Egypt in the 4th century. He taught that Jesus was not the same substance as God, but only the best of created beings.

Begotten: in this context, it means to cause to exist.

Incarnate: the taking of human form and nature.

The catholic church: the word catholic means “universal,” so the universal church, or the Christian church as a whole.

The apostolic church: the original twelve disciples were selected by Jesus, and commissioned to preach the Gospel. They are designated as apostles. An apostle is a messenger, a person sent on a special mission. Therefore, the apostolic church is according to the doctrines of the apostles given by Jesus Christ.

The Apostles Creed (Symbolum Apostolorum)  The history of the Apostles’ Creed is unknown, but it was discovered about the year c390 AD.  It is the most popular creed used in worship by Western Christians.

Its central doctrines are those of the Trinity and God the Creator.  The creed was used as a summary of Christian doctrine for baptismal candidates in the churches of Rome.  Since the Apostles Creed is still unaffected by the later Christological divisions (various denominatinons), its statement of the articles of Christian faith remain acceptable to these Christian denominations: 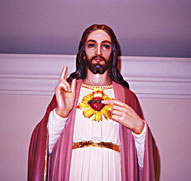 I believe in God, the Father almighty,
creator of heaven and earth.

I believe in Jesus Christ, His only Son, our Lord.
He was conceived by the power of the Holy Spirit,
and born of the Virgin Mary.

He suffered under Pontius Pilate,
was crucified, died, and was buried.

He descended to the dead.

On the third day he rose again.

He ascended into heaven,
and is seated at the right hand of the Father.

He will come again to judge the living, and the dead.

I believe in
the Holy Spirit,
the holy catholic Church,
the communion of saints,
the forgiveness of sins,
the resurrection of the body,
and the life everlasting.

The Athanasian Creed, received in the western Church as having the same status as the Nicene and Chalcedonian, says: "We worship one God in Trinity, and Trinity in Unity; neither confounding the Persons nor dividing the Substance."

Most Christians (Roman Catholics, Orthodox Catholics, and Protestants alike) accept the use of creeds, and subscribe to at least one of the creeds mentioned above. A minority of Protestants, notably Restorationists, a movement formed in the wake of the Second Great Awakening in the 19th century United States, oppose the use of creeds.

The Chalcedonian Creed, developed at the Council of Chalcedon in 451, though rejected by the Oriental Orthodox Churches (referred to as part of the Eastern Churches), taught Christ "to be acknowledged in two natures, inconfusedly, unchangeably, indivisibly, inseparably": one divine and one human, and that both natures are perfect but are nevertheless perfectly united into one person.

Judaism says there is a God, and the way to him is to fulfil God's will which is found most clearly in The 10 Commandments.

Hinduism says there is a God, but we have to go through reincarnation to get to him, from sub-human form to human form to improve the soul.

The book is succinct, and gets to the core issues -- the key questions. You do not have to read the entire library to understand the differences among the religions.