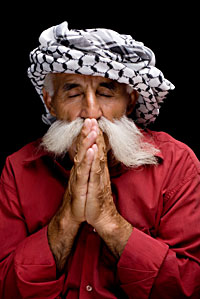 Jihad is the Arabic for what can be variously translated as "struggle" or "effort," or "to strive," or "to exert," or "to fight," depending on the context.

In the West, the word is generally understood to mean "holy war," and the terms are given, inaccurately, exclusively military connotations.

The Qur'an does call for "jihad" as a military struggle on behalf of Islam. But the Qur'an also refers to jihad as an internal, individual, spiritual struggle toward self-improvement, moral cleansing, and intellectual effort - the difficult effort that is needed to put ALLAH's will into practice at every level, personal, family, social, business, and political.

A Mujahid is Arabic which means "struggler." The plural is Mujahideen. It is a person involved in a jihad. Muslims who engage in the defense of Muslim lands, or who take up a struggle in defense of the oppressed, the poor or the exploited, or against the oppression of the state or foreign invaders, consider themselves to be mujahidin, or mujahideen.

Within Islamic culture and belief, Muhammad is said to have regarded the inner struggle for faith the "greater jihad", prioritizing it over physical fighting in defense of the Ummah, or members of the global Islamic community.

One famous hadith has the prophet saying:

"We have returned from the lesser jihad (battle) to the greater jihad — jihad of the soul."

Muslim scholar Mahmoud Ayoub states that "The goal of true jihad is to attain a harmony between Islam (submission), iman (faith), and ihsan (righteous living)." Greater jihad can be compared to the struggle that Christians refer to as "resisting sin"; i.e., fighting temptation, doubt, disbelief, or detraction.

The greater jihad is about holding fast against any ideas and practices that run contrary to the Muhammad's revelations (Qur'an), sayings (Hadith), and the examples set by how he lived his life (Sunnah). This concept of jihad has does not correspond to any military action.

The title, or term, Caliph is the head of state in a Caliphate, and the title for the leader of the Islamic Ummah (an Islamic community). It is a transliterated version of the Arabic word Khalifat (or, Khalif), which means "successor" or "representative."

In Islamic culture the early leaders of the Muslim nation following Muhammad's death were called "Khalifat Rasul Allah," which means the political successors to the messenger of ALLAH (referring to Muhammad). Caliphs were also often referred to as Am_r al-Mu'min_n, "Commander of the Faithful", or Imam al-Ummah, "leader of the Muslims."

The Caliphate has two lesser titles. Most historical Muslim governors were called either sultans (meaning "strength", "authority", or "ruler ship") or amirs (also known as "emir" to denote a military title, roughly meaning "general" or "commander"). These titled positions gave allegiance to a caliph.

Emir is title with various meanings; i.e., a military title roughly meaning "commander" or "general," and "prince" as a title of nobility. It is transliterated as amir, aamir or ameer, also. It is a high title of nobility, or office, used throughout the Arab World, and had its beginnings in the medieval Muslim World.

Sheikh (also written as Sheik, Shaykh, Shaikh, Cheikh, and other variants) is an honorific term which in the Arabic language means "elder." It is commonly used within the Muslim world to denote an elder of a tribe, a revered wise man, or an Islamic scholar 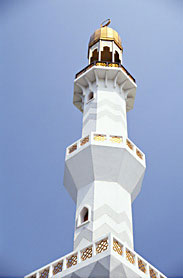 Al-Aqsa Mosque, or al-Masjid al-Aqsa; meaning, "the Farthest Mosque." It is also known as al-Aqsa. It is an Islamic holy place in the Old City of Jerusalem.

The mosque itself forms part of the al-Haram ash-Sharif, or "Sacred Noble Sanctuary," along with the Dome of the Rock. This is a site also known as the Temple Mount, and considered the holiest site in Judaism, since it is where the Temple in Jerusalem once stood.

Widely considered as the third holiest site in Islam, Muslims believe that the prophet Muhammad was transported from the Sacred Mosque in Mecca to al-Aqsa during the Night Journey. Islamic tradition holds that Muhammad led prayers towards this site until the 17th month after the emigration, when God ordered him to turn towards the Ka'aba.

According to Islamic culture Mullah is a Muslim man, educated in Islamic theology and sacred law. The title, given to some Islamic clergy, is derived from the Arabic word mawla; meaning, both "vicar" and "guardian." In large parts of the Muslim world, particularly Iran, Bosnia, Afghanistan, Turkey, Central Asia, and the Indian subcontinent, it is the name commonly given to local Islamic clerics, or mosque leaders. It is primarily understood in the Muslim world as a term of respect for a religiously educated man.

Ayatollah (meaning, "Sign of God") is a high ranking title given to Twelvers Shi'a clerics. Those who carry the title are experts in Islamic studies such as jurisprudence, ethics, and philosophy. They teach usually in Islamic seminaries.

The title is currently granted to top Shia mujtahid after completing sat'h and kharij studies in the hawza. A mujtahid is an Islamic scholar, competent to interpret divine shari'a law in practical situations using ijtihad (independent thought). Hawza is a seminary of traditional Shi'a Islamic studies.

By then he would be able to issue his own edicts from the sources of religious laws: Qur'an, Sunnah, "intellect" (rather than the Sunni principle of Qiyas). Most of the time, a certificate is issued, attested by his teachers. The ayatollah can then teach in hawzas according to his specialty, can act as a reference for their religious questions, and act as a judge. There is an important difference from Shi'a ayatollahs and "saints" in other religions and Sunni Islam. They are not regarded as enlightened by God Himself, but by the Word of God.

The name "ayatollah" originates from the Qur'an where human beings can also be regarded as signs of God, the literal translation of the title. 51:20-21 of the Qur'an states: 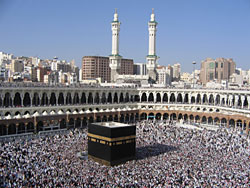 Ka'ba (also known as, Ka'aba, Ka'bah, Kabah, and Caaba) is the center of the holiest place of worship in Islam. It is located inside the Sacred Mosque of Mecca, Al Masjid Al-Haram. Its name is an Arabic word that means "a home, or a room, that looks like a cube."

The Ka'aba was built by Prophet Abraham as a landmark for the House of God, for the sole purpose of worshipping ALLAH alone. (See section Mecca, and the section on Muhammad, History & Background.)

Quran: 2:125. We have rendered the shrine (the Ka`aba) a focal point for the people, and a safe sanctuary. You may use Abraham's shrine as a prayer house. We commissioned Abraham and Ismail: "You shall purify My house for those who visit, those who live there, and those who bow and prostrate."

Quran: 2:127. As Abraham raised the foundations of the shrine, together with Ishmael (they prayed): "Our Lord, accept this from us. You are the Hearer, the Omniscient."

Ka'aba is the center of the circumambulations (known as the "tawaf", which means, "to walk around") performed during the pilgrimage (known as "hajj"), and it is toward the Ka'aba that Muslims face in their prayers (known as "salat"). Before Prophet Muhammad's Islam religion, Meccans who lost the religion of Abraham, worshipped many idols.

The Black Stone, possibly of meteoric origin, is located at one of its outside corners. It has been used by the pilgrims as a landmark to count the number of circumambulations. Some traditional Muslims, in defiance of their religion, consider the stone holy, and put emphasis on touching it and kissing it.

The Ka'aba is a large masonry structure roughly the shape of a cube. It is made of granite from the hills near Mecca, and stands upon a 10 inch marble base, which projects outwards about one foot. It is approximately 43 feet high, with sides measuring 36 feet by 42 feet. The four corners of the Ka'aba roughly face the four cardinal directions (meaning, north, south, east, and west) of the compass.

The Ka'aba is covered by a black silk and gold curtain known as the kiswah, which is replaced yearly. About two-thirds of the way up runs a band of gold-embroidered calligraphy with Qur'anic text, including the Islamic declaration of faith, the Shahadah.

Entry to the Ka'aba's interior is generally not permitted, except for certain rare occasions and for a limited numbers of guests. The entrance is a door set 7 feet above the ground on the north-eastern wall of the Ka'aba, which acts as the faáade. There is a wooden staircase on wheels, usually stored in the mosque between the arch-shaped gate of Ban_ Shaybah and the well of Zamzam.

Inside the Ka'aba, there is a marble and limestone floor. The interior walls are clad with marble halfway to the roof, and tablets, with Qur'anic inscriptions, are inset in the marble. The top parts of the walls are covered with a green cloth decorated with gold embroidered Qur'anic verses. Caretakers perfume the marble cladding with scented oil, the same oil used to anoint the Black Stone outside.

There is also a semi-circular wall opposite, but unconnected to, the north-west wall of the Ka'aba known as the hat_m. This is 35 inches in height and 5 feet in length, and is composed of white marble. Some believe that the graves of Abu Simbel, Ishmael, and his mother, Hagar, are located in this space, and for this reason it is not entered during the ritual circumambulation.

The actual structure of the Ka'aba has been demolished, and rebuilt several times in the course of its history. Around the Ka'aba is a restricted area (known as the "haram" area) extending in some directions as far as 12 miles, into which only Muslims may enter.